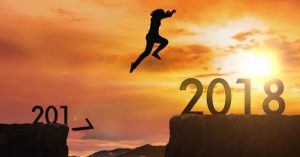 These days just clicking on a news app in the morning feels like an act of courage. The news can explode between pouring your breakfast cereal and kissing your kids goodbye.

No matter how you earn your living, you’re likely looking not only at the headlines but at the intersection between current affairs and your industry.

In the world of corporate job searches, for instance, we’re keenly aware of a recent report which found that more than half of American workers didn’t get a raise in the past year. But, it appears that not all news is bad news. We’ve heard whispers that the bull market may not be coming to an end, as many had feared, and even predictions that growth is “likely to remain above potential and the unemployment rate is likely to continue to drop.”

No way around it: Last year was a roller coaster. What does it mean for the job market? And what will happen in 2018?

No one has a crystal ball, but combing through predictions for the new year there’s a lot of promise out there, particularly in finance and IT.

There’s a lot of potential in IT

In 2018 there will be continued growth in areas such as IT modernization, intelligence-driven enterprise and data security. This will be particularly true in government, where agencies are updating old systems and transitioning to more stable infrastructures.

If you’re a software engineer, you’re in luck. By some estimates, employers may be paying up to 20% more to attract and retain top talent. And there are still shortages of data scientists, information security analysts and HR talent. The long-term forecast for biomedical engineering looks strong, too. If you’re in one of these industries, 2018 may be your lucky year.

Market forecasts can be scary…

…but they’re still just forecasts. Unemployment is way down and corporate America is still expected to “keep earning in spades,” according to a recent analysis. Watch for opportunities in high-level positions in finance, including CFOs, tax accountants, accounting managers, financial analysts, internal audit directors and controllers.

People are creatures of the future—we naturally look ahead. This year, resolve to do so with courage and an eye for opportunity